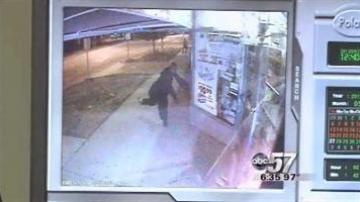 SOUTH BEND, Ind. --  This is the suspect Southside grocery employee Vicky Singh caught on tape launching a rock into the window of the store.

"The cops said show me the video", said Singh.

The rock thrower was apparently trying to steal the A.T.M. machine, but he set off the alarm.  The thieves left before police showed up , but they did not have enough time so they left empy handed.  But these were some pretty bold bad guys.

"They came back and tried to break the window again", said Singh.

As if Singh's video was not enough help to police, when they came back for a second try, Singh did some crime stopping of his own.

Singh was on the phone with police dispatch while he was following the failed ATM snatchers and they told him not to take this into his own hands and to return to the store.

"They said never follow them they will shoot and kill you", said Singh.

But singh was able to get the license plate number and gave it to police and he is confident they will catch this guy soon.

"I think they will catch them soon", said Singh.

As my story was running, according to the owner, the man who was in the video throwing the rock showed up. Right now police are reviewing the tape and the suspect is in police custody in the back of this police car.