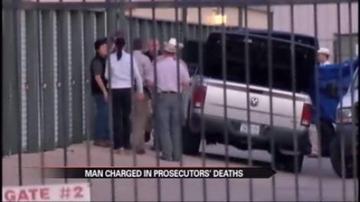 Police announced the charge against Eric Williams Thursday. It comes just one day after his wife Kim Williams was arrested and charged in the deaths.

Police say the husband and wife team planned and executed the murders.

The Kaufman County district attorney and his wife were found dead in their home last month.

The assistant DA was shot and killed back in January.

"She drove on Mark Hasse's killing. Eric did the shooting. On the McLelland killings, it appears that she was a passenger in the vehicle and that Eric, again, did the killing," said Sheriff David Byrnes, Kaufman county Texas Sheriff's Office.

He is currently in jail since his arrest Saturday. He is also charged with making a terroristic threat.