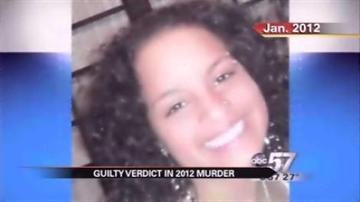 SOUTH BEND, Ind.-- Charles Moore was found guilty of four murder charges in connection to a double homicide and robbery.

The two people Moore is convicted of killing in January 2012 are Alejandro Tinoco and Jazmin Conlee.

Alejandro Tinoco’s family said that while justice is served for their loved one, they are still heartbroken that they will never get to see him again.

They said this week has been difficult and asked for privacy from the media.

Yolanda Newbill said, “My heart is ripped in pieces. That’s my first born and I know him. I know from a mother’s intuition that he didn’t do that."

Newbill doesn't know how the jury found her son guilty of a double murder.

A jury convicted Moore in the shooting of Tinoco and Conlee in their home on Adams Street in South Bend.

Newbill said, “For the three other defendants to collaborate a story and pin it on him is totally wrong and like I said, God is our revealer, the truth will be revealed.”

Newbill questioned the lack of evidence however she did say she knows the other families are hurting for their loss.

She says she is losing her own son to a guilty verdict he never should have received.

Newbill said, “Nothing, no evidence, nothing! There were just testimonies from these other defendants and for my son his life is gone. But we’re going to fight. That’s why we are here today, we’re going to advocate for his rights.”

Frida morning the sentencing will get underway where the judge will decide how long Moore will be behind bars.