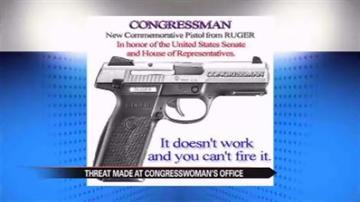 MISHAWAKA, Ind. -- Several law enforcement agencies are investigating a possible threat against Congresswoman Jackie Walorski. Police say a man brought a photo of a gun into her Mishawaka office on Wednesday with a message for the US representative.

On the gun picture, at the top it says “Congressman” and at the bottom it says “It doesn’t work and you can’t fire it!”

The message is enough to be considered a possible threat or intimidation, so police are looking for the man who dropped it off.

"I was wondering if it was meant to be a threat,” said Jenn Sjoberg.

"Well you could take this a couple of different ways,” said Rocco Rigsby of Midwest Gun Exchange.

The police report says a man handed the paper to an employee, said the office should be ashamed and left.

He hasn't been seen since.

The Mishawaka Police Department says that they are being vigilant by driving Walorski's office, however the US Capitol Police are handling this investigation out of Washington DC.

Walorski's office issued this statement about the situation that says, "A report was filed under the instruction of U.S. Capitol Police as a safety precaution due to suspicious correspondence delivered to the Mishawaka district office.”

"Me personally I don't see this as being a threatening message it's more of just kind of a joke kind of a spoof,” said Rigsby.

But with legislators discussing the possibility of more gun control laws, the message could mean a lot more.

The police report also states the last thing the man said before he walked out is he had the same note for Senator Donnelly and he was headed for his office.

Whether he showed up is uncertain, Donnelly's office says they do not comment on security matters.

According to the Mishawaka Police Department the Secret Service and the Indiana State Police are also involved in the investigation.