Man dies trying to save his dog 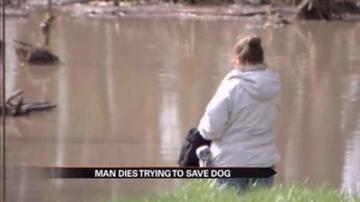 HAMILTON COUNTY, Ind. -- Flooding near Indianapolis killed a man who was swept away in the rushing water.

The pickup truck they were in was sinking in a creek when he called 911. His brother says David got out of the truck to get his dog to higher ground.

The dog made it but David did not.

Family members now plan to care for the animal.

"It just picked his truck up and it floated away, just like a feather," said Bob Baker, victim's father.

Another man died in the same stretch of flooded road in Hamilton on Friday night when his car flipped and went under water.