Man dragged by car after crashing into a tree 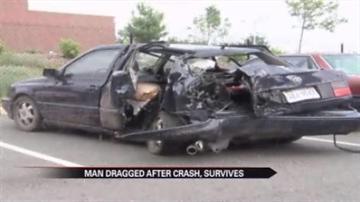 JAMES CITY COUNTY, Va. -- Virginia police say a man crashed his car into a tree and then was run-over by another car and dragged for four miles.

The first car hit a tree. That driver was ejected and landed in the road.

Police say he was racing the driver that eventually dragged him.

The second driver knew he hit some debris from the crash but did not realize it was a person.

"He was aware he had struck debris from the crash, but was not aware that he had dragged a body," said an officer. "It was a horrific scene; I can only image what the motorist in New Kent must have thought and what the children must have been thinking."

The man dragged under the car is in serious condition but he is able to talk.