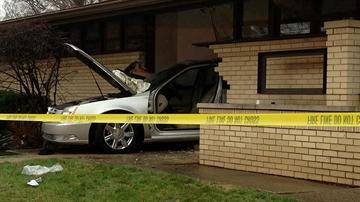 SOUTH BEND, Ind. – Two people were hospitalized after a man drove his Cadillac through the brick wall of a law office at Washington and Scott streets in South Bend.

Firefighters say the driver was headed east on Washington Street when he drove into a fire hydrant.

He then put the car into reverse and ended up across the street, through the yard and into the brick building.

Tom Erlandson owns the Oliver Inn across the street. He heard a loud boom when the car went through the office.

The driver was conscious when he was pulled out of the vehicle and put on a stretcher.

“He looked like he was conscious when they took him out because he was moving his arms, but they had him pretty well tied down on the stretcher,” said Erlandson.

Firefighters say the driver may have had some kind of medical problem.

“The driver was a little in and out of it. It appeared, according to the first officers, to be having some type of seizure possibly,” said Sergeant Bill Kraus of the South Bend Police Department.

Two women inside the building watched the car drive straight at them.

"They saw the vehicle go into reverse and were able to get somewhat out of the way otherwise they could have been, it's an office area there, could have been pinned underneath all of the debris or the car,” said Kraus.

One of the women inside the office was taken to the hospital with non life threatening injuries.

The attorneys weren't inside at the time.

Firefighters say at least one of them was in court.

But they did show up later to assess the damage.