Man exposes himself to neighbors 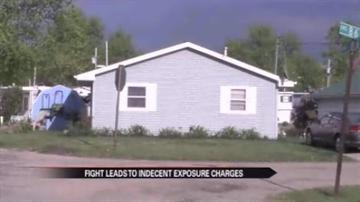 KOSCIOUSKO COUNTY, Ind. --  A neighborhood confrontation turned really weird in Kosciousko County when one neighbor decided to flash his neighbors.

“He then walked back to the water’s edge and grabbed his genitals and his buttocks,” said a neighbor.

Neighbors on EMS b6c Lane said a small argument got really heated and then turned strange a couple days ago.

“He was driving at 40 or 50 miles per hour stirring up dust on a gravel road,” said a neighbor.

“I put my hands up in the air as if to say what are you doing driving that way,” said a neighbor.

That’s when neighbors say Shepherd came to the edge of the lake channel, screamed obscene words and exposed himself in front of a neighbor, his wife and their ten-year-old son.

“He was rubbing his nipples and his genitalia,” said a neighbor.

“Then proceeded to pull down his pants and urinate into the water,” said a neighbor.

The flasher returned home but then did something even scarier. According to neighbors, he was holding an object pretending it was a long gun and pointing it at one neighbor while threatening him.

“He told me I would be dead,” said a neighbor.

Cops were called for a third time. Multiple agencies responded and they arrested Shepherd.

“They took him to the ground and cuffed him,” said a neighbor.

But one neighbor said it was not soon enough, because now his family is afraid to sleep at home for fear what will happen when Shepherd gets out of jail.

Shepherd is currently being held at the Kosciousko County jail on $350 bond.