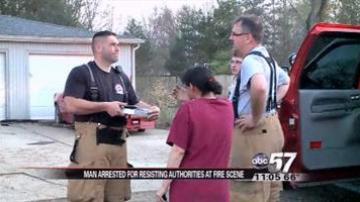 NILES TOWNSHIP, Mich. - A homeowner is facing charges after police had to stop him from running into his burning home.

Crews were called to the home on Adams Road for a kitchen fire. The flames started near the man's stove and burned through the wall. A neighbor ran over to help put the fire out using an extinguisher.

Firefighters were able to save the man's home, but he was stopped by sheriff's deputies for trying to run inside and save his pets. Firefighters told ABC57 the deputy was forced to use a stun gun to stop the man from running inside.

Lt. Robert Ruff with the Niles Township Fire Department said people who try to run back into their homes create more problems for firefighters.

"It just creates more victims. They don't have the equipment to go inside and be inside the fire like that," Lt. Ruff said. "They are not prepared for the conditions in there. They can't breath the smoke, they become overwhelmed and now we have two or three victims instead of one."

The quick response from neighbors and firefighters kept the flames from spreading beyond the kitchen.