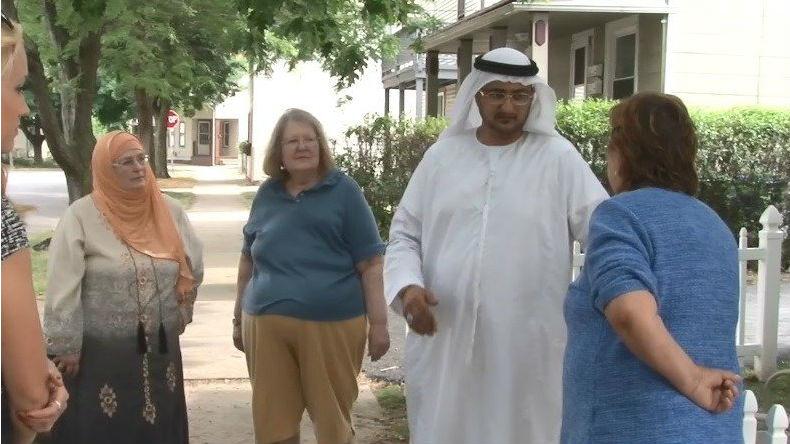 Avon, OH - Spending Sunday smiling and speaking to neighbors, Ahmad al-Menhali enjoyed a much more peaceful evening than what he experienced just days ago in Avon.

"Those eyes, which I saw, I cannot forget now how they looked at me like they wanted a reason to kill me," said al-Menhali.

Wednesday Avon Police officers, with guns drawn, ordered al-Menhali to the ground after they got 911 calls from a hotel clerk's family telling them al-Menhali pledged allegiance to ISIS in the hotel lobby. Cleveland 19 News was the first television station to show you the dramatic video from the scene.

"When you hear someone say he pledged allegiance to ISIS, that changes it. Then you find out that statement was never made and it just kind of angers us," said Avon Mayor Bryan Jensen.

The false alarm angered Mayor Jensen and scared al-Menhali. Police bodycam video captures al-Menhali passing out in the hotel parking lot. Paramedics took him to the hospital where he stayed until Saturday. Al-Menhali believes he had a mini stroke, which affected his speech for days.

"Of course I cannot sleep because when I'm just sleeping bad dreams come in," said al-Menhali.

When police told al-Menhali what happened, he thought it was a prank. "I came a smile on my face because I thought candid camera, like a joke," he said. "ISIS do not wear like me. I wear like Jesus."

Unfortunately, none of it was a joke. To try to keep this type of situation from happening to anyone else, al-Menhali met with the Avon Chief of Police and the Mayor Saturday night.

Mayor Jensen said Wednesday was the first time Avon 911 dispatchers received a call claiming someone was pledging allegiance to ISIS. "I think, for us maybe, this was a practice run because we know what could have happened. We live in a crazy world," he said.

"I feel that is a good step from them," said al-Menhali. "I respect them."

Despite everything that's happened to al-Menhali, he said he's happy to be in America. Sunday he celebrated with a patriotic cake and American flag. "I love America. I love people," he said.

Al-Menhali said he hopes people start being more respectful and stop being so violent.

Mayor Jensen said he wants the community to continue to speak up. If you see something, say something. However, he said to make sure you always tell the truth, don't fabricate a scene, and don't panic.

It is possible the hotel clerk involved in Wednesday's incident at the Avon Fairfield Inn & Suites will face charges. Mayor Jensen said more details will be released mid-week