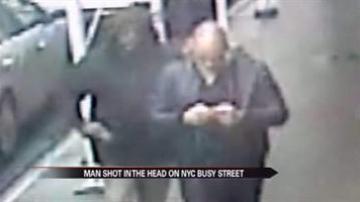 NEW YORK -- A law student from L.A. was murdered on the busy streets of New York City and police have released new images of the gunman.

Seconds after the photo was taken, one shot was fired into the back of his head which has led some to think this was a planned attack.

"The sheer fact that he shot him in the back of the head tells me that this was planned and this was directed," said Brad Garrett, Former Special Agent, FBI.

Those who knew the victim say he was a good father but he also had an extensive rap sheet. Twenty arrests in the past eight years Including cocaine possession, hit-and-run and grand theft.

Police said they're looking into whether his criminal past is tied to his murder.