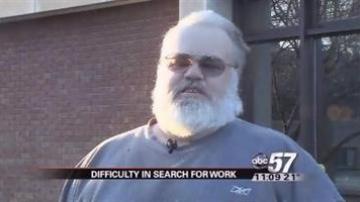 ELKHART COUNTY, IND. -- Fifty-one-year-old Phil Labar has had a job since he was 9-years-old, until four years ago when the economy took a plunge.

"The recession hit and orders declined and they had a mass layoff," said Labar.

He lost his job packaging parts for the housing industry and began to collect unemployment while he looked for work.

"I did an average of 10 a week online or in person and I still continue to do at least 10 applications a week," said Labar.

Labar has filled out over 2,000 applications and went on 10 interviews in the last four years, but still no job.  He has applied for jobs in factories, retail, and even fast food, but many of these places tell him he is overqualified, especially because his previous wages were between $13 and $19 an hour.

Labar said he never thought his work experience would hurt his chances of employment, and because some people abuse the unemployment system, there is a misconception that people like him are not looking for a job.

"That is the farthest thing from the truth. I would take any job available, if it is raking leaves, if it is cleaning toilets I would do it to earn money for my family," said Labar.

Labar does not care if he is making minimum wage as long as he can help put food on the table.