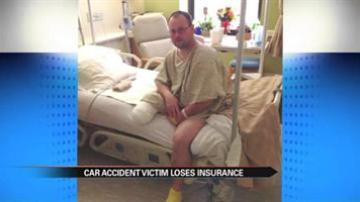 SOUTH BEND, Ind. -- A Middlebury man is still in the hospital recovering from a vehicle accident on Thanksgiving day. Since the accident he and his wife have both lost their jobs.

"My husband and I are without jobs, filing unemployment, and still in the hospital," said Sarah Little.

On Thanksgiving day, her husband Dan Little was in a car accident.

"Daniel flipped the car about five or six times it looks like from when I went to the scene of the accident, and was thrown out of the windshield about 100 feet away from the car," said Sarah.

Dan's leg was amputated and he is still hospitalized.

He was just let go from his job, which means no insurance.

"He was hired to do a job, and basically he can't perform it so they had to let him go. So no insurance there either," said Sarah.

Dan has been an avid hockey player since he was a child. Sarah says he is still hoping to be able to play again someday.

"Every single time a surgeon would come up and talk to us, he was like, 'Can I still play hockey? Can I still get on the ice?'" said Sarah.

To help the Littles with Dan's hospital bills, there will be a fundraiser on December 22nd at the Ice Box in South Bend from 1:45-4:45 with hockey games and open skating for the whole family.

There will also be a silent auction and raffles.