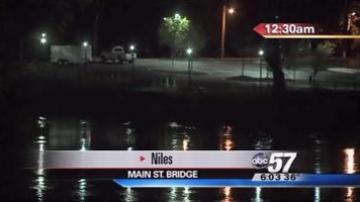 Niles, Michigan -- A Niles man is recovering in the hospital after being found in the Saint Joseph River early Tuesday morning. The Fire Chief says he's lucky to be alive.

According to the Chief, the man floated almost 400 feet in the water from the Broadway Bridge to the Main Street Bridge. That's were they found him floating near the coast barely conscious.

Rescue Crews were able to pull the man out of the water fast after someone called 9-1-1. They deployed boats, and used spotlights to search through the water.

"He was very tired, and could not hold himself up. A lot of times hypothermia will set in in this type of weather, but we were able to get him to an ambulance" said Niles Fire Chief Larry Lamb.

Police are still investigating why the man was in the water in the first place.