Man habitually arrested to stay out of cold 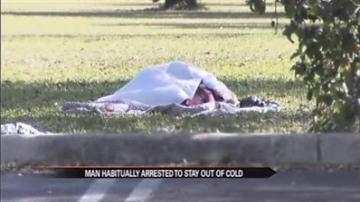 The homeless man lives in Florida and habitually gets himself arrested become he wants a warm place to sleep.

After he was arrested nine times, the judge set him up with at a nearby homeless shelter so he could stay out of the cold.

Unfortunately, he would not follow the shelter's rules of staying sober so he has chosen to stay in jail.

"It seems apparent that you like being in jail more than you would like being in a homeless shelter. Now, I can't figure that out," said John Hurley, Broward circuit court judge.

The average low temperature on the days of those nine arrests was 52 degrees.