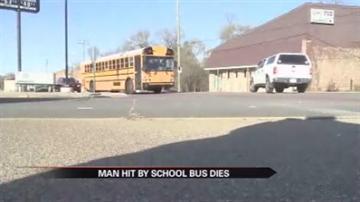 SOUTH BEND, Ind. -- The man who was hit by a South Bend school bus died according to a South Bend Police Officer.

He told ABC 57 that 59-year-old Kenny Reynolds died from his injuries Wednesday.

He was hit by a rear-view mirror of the school bus that was turning while he was crossing the street.

Reynolds had been in the hospital for several weeks.