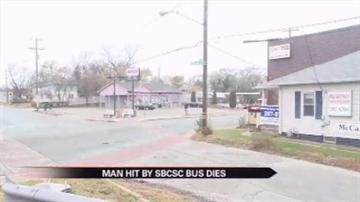 SOUTH BEND, Ind. -- Funeral arrangements are pending for a man who was hit by a South Bend Community School bus last November.

For Adrienne Green, 59-year old Kenny Reynolds was more than her neighbor, he was her friend.

“For him to be gone is a bad thing,” said Green.

Reynolds fought for his life for nearly 2 months before succumbing to his injuries on Wednesday.

"He moved in next door, he is a fun loving great guy, who had diabetes and was sick, but nothing never kept him down,” said Green.

Even though he walked slow and with a cane she says he didn't let that slow him down.

"He got up at 5 o'clock every morning, started his day, went to bed early at night,” said Green.

Police say Reynolds was hit by a bus while crossing Portage Road on November 12th.

"He had some health issues but the primary cause of death is going to be the head injury from the crash,” said Sergeant Bill Kraus of the South Bend Police Department.

This afternoon South Bend Schools issued a statement that says their "deepest sympathies are extended to the family of Kenneth Reynolds.”

The statement went on to say, “We are also extending our support to the bus driver and students who were on the bus in November when the accident occurred."

Reynolds' friends say they hope there's a lesson to be learned in this tragedy.

"Maybe they'll learn something about driving so fast on Portage,” said Green.

After the accident the bus driver was on paid leave, but school officials say she has since returned.