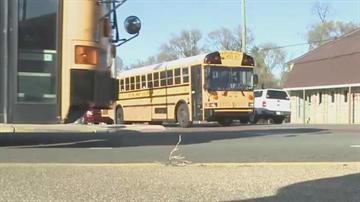 SOUTH BEND, Ind. – A South Bend man is in critical condition and may not survive after being hit by a school bus early Monday morning.

Kenny Reynolds, 59, was crossing the street at the intersection of Elwood Avenue and Portage Avenue at around 7 a.m. when a school bus carrying 39 students from LaSalle Intermediate Academy turned west onto Elwood and hit him.

"I was crossing the street over by the tobacco mart, I seen him laying on the ground," described Patricia Turcynski, Reynolds’s roommate.  “He had blunt force trauma and everything and his head was bleeding real bad and blood was coming out of his mouth."

Patricia Turcynski had just left her home when she saw her roommate lying on the ground, she watched as he was taken away to Memorial Hospital with severe injuries.

The South Bend Community School Corporation sent a letter home with LaSalle Intermediate students informing them of the accident.  The letter says the crash was “minor” and that Reynolds had received non-life threatening injuries.  However, Reynolds’s family told ABC 57 that he suffered massive internal bleeding, several broken bones, a head laceration and that he may not survive.

According to South Bend schools the driver of the bus is on two-days paid leave pending an investigation of the accident.