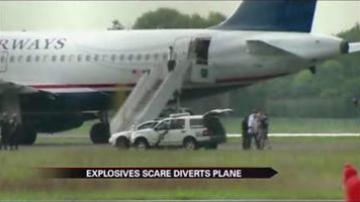 PHILADELPHIA -- A man is in FBI custody after he caused a scare on an airplane headed to Texas.

A tipster on Facebook posted something about someone on a U.S. Airways flight that may explosives.

ABC News is now reporting that his angry ex-girlfriend may have been behind the threat.

FBI agents took a man into custody for questioning and is cooperating with police.

"It doesn't take a rocket science to figure out when you place a hoax against civil aviation the consequences can be catastrophic," Richard Quinn, FBI Assistant Special agent in charge, said. "I dint want to speculate specifically, obviously there will be severe charges."

No explosives were found on the plane.