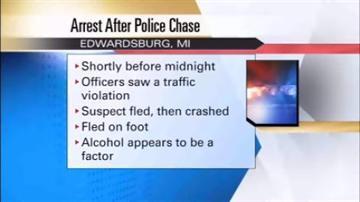 EDWARDSBURG, Mich. — A Three Rivers man is in custody after he led police on a high-speed chase through a school zone in Edwardsburg on Friday.

Officers observed a traffic violation and attempted to stop the vehicle.

The 32-year-old suspect fled and led police on a short pursuit.

The suspect failed to make a turn and drove off the road, striking several boulders.

He then fled but police were able to catch and arrest him.

Police are not releasing his name until he is arraigned.