Man on flight declares he has a bomb 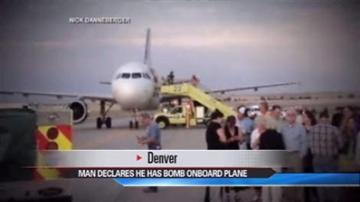 DENVER — A passenger on a flight from Knoxville, Tenn. to Denver declared there was a bomb in his bag Friday night. As a result, 136 passengers and five crew members evacuated the Frontier Airlines flight.

The man was sweating and shaking before saying he had a bomb.

One passenger on that flight says they were all evacuated because of that man.

"The guy across the aisle from me pulled the flight attendant to the side and told her that he had a bomb in his backpack," said passenger Nick Danneberger. "And before you know it, the authorities boarded the plane and removed him first. He left the plane in handcuffs."

Both the FBI and the Denver bomb squad were called in to assess the situation.

The man is in custody but officials won't confirm if there was actually a bomb on the plane.