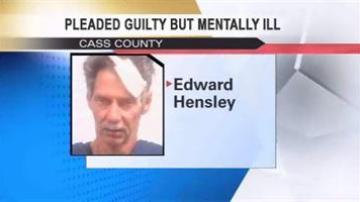 CASS COUNTY, Mich. -- Monday afternoon, Edward Hensley entered a plea of guilty but mentally ill to the charges of second degree murder in the death of his sister.

June 29, 2012, Martha Sexton was found stabbed at her residence on US12 in Mason Township.

July 2 2012, Hensley was charged with her murder and taken into custody.

In late July 2012, Hensley was ordered to undergo a forensic examination to determine whether he was competent to stand trial.

He was treated and deemed competent for trial in March 2013.

In April 2013 he was ordered to undergo another exam to determine if he was sane at the time of the murder. The Center for Forensic Psychiatry's report said Hensley was sane but mentally ill.

Hensley requested a second examination and in an October 2013 report, h is psychiatrist agreed that he was sane but mentally ill.

Officials say a plea of guilty but mentally ill is treated the same as a guilty plea, but the defendant receives mental health treatment in prison.