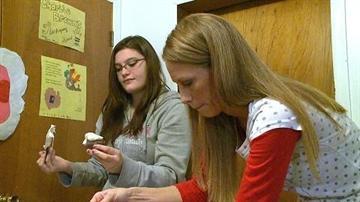 HOWARD, Mi – A man posing as a Cass County employee has reportedly approached a home on Carberry Road and asked to be let inside. It happened Monday morning.

By Monday night people living on the street had heard about the man who drove off in a white extended cab Ford F-150.

It was because of posts on that site, Sherri Clark’s friends began to call her during the day.

Clark is a stay-at-home-mom. She watches her children get on the bus every morning, and is there when they get home every afternoon.

As a family, they have a plan for many emergencies, and Clark feels safe in her home.

Still, Monday evening she was unnerved when an ABC 57 reporter knocked on her door.

After showing identification she allowed our reporter inside. She told him she was being extra cautious because of the reports of the imposter from earlier. But there was something more weighing on her mind.

Nearly two years ago, John and Carolyn Tarwacki were murdered in their home. Clark told us, they were friendly people.

While she could not say for sure what happened that February day in 2010, she was certain of one thing; the couple didn’t survive.

The Tarwacki murders happened about two blocks north of Clark’s home, and it has become a constant reminder to her to make sure strangers at the door show identification before she opens up. “I’m raising two kids out here, you know, I can’t not take those heeds of warning. I have to take them seriously because if I don’t that’s when something bad is going to happen. I’m just not willing to let that happen to my family,” said Clark.

In the meantime, the man who was impersonating a county worker had a similar description to someone who allegedly tried to abduct a woman in Dowagiac last month.

He is white, and appears to be about 40 years old, around 6 feet tall, has dirty blonde hair, and was wearing a blue flannel type shirt.