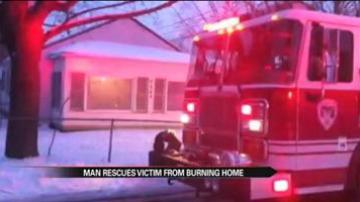 INDIANAPOLIS -- An Indianapolis man is hailed as a hero for a second time.

His most recent rescue happened when he was dropping off a co-worker and spotted smoke coming out of a home.

Despite warnings from a 9-1-1 operator telling him not to go in, He did, ultimately saving the life of the man trapped inside.

"He didn’t have his eyes open but you could see it in his face that he was dying. And when he got outside, it was like... it was reversing. It was like instead of on his way to death, he was coming back to life," said Burch.

Burch saved two people including a baby from a burning building in 2004.