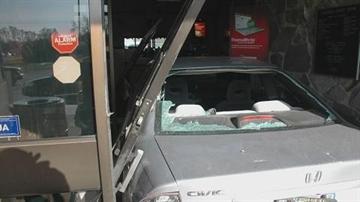 WALKERTON, Ind. – A Walkerton man drove his car into a bank after attacking his own car in a fit of rage and screaming about the end of the world.

It happened on State Road 23 in Walkerton Sunday just before noon. Adam Mann, 23, was arrested after he drove his car into the Teachers Credit Union.

According to witnesses, Mann drive up the wrong lane to an intersection blocked by railroad crossing arms, while a train was passing by.

According to drivers, Mann got out of his Honda Civic and was screaming. They told police Mann swung a baseball bat at people, while ranting and striking the windows of his own car.

As the train cleared the intersection, Mann was seen jumping back into his car and driving around the railroad crossing arms.

Patrolman Charles Kulp was the first to respond and after seeing broken glass on the road and drivers pointing north, the direction Mann was travelling, he headed that way activating his lights and siren.

Just a few seconds later, Kulp watched Mann leave the road, cut across an embankment and right into the bank.

According to Kulp, Mann never hit his breaks. “The front of the vehicle came to rest inside the bank right into the teller lines, where you would stand to be checked on, and the back end of the vehicle was past the entrance doors to the bank. So he was completely inside the bank and if it would have been open at that time, people anyone in line would have been in danger,” said Kulp.

Mann was taken to the hospital after complaining about an injured wrist. He was released into police custody and taken to the St. Joseph County Jail where he was booked on several charges.

Police suspect drugs or alcohol to have played a role in Mann’s actions.