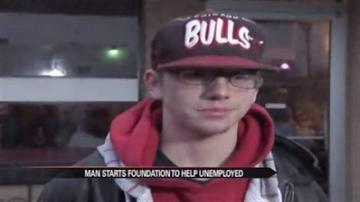 INDIANAPOLIS. -- Last week, he was willing to walk 10 miles for a job and now an Indianapolis man is getting the chance to help others.

The 18-year old says he has gotten so many donations that he is setting up a foundation.

When his story went viral people started sending him money and now he is donating all of it.

Half will go to those who helped him, and the other half will help others find a job.

"25 percent of my half is going to Papa Roux employees because they have been working their fingers to the bone, while all of this has been going on," said Jhaqueil Reagan. "They really deserve it you know."

One thing he would not likely give away are his Chicago Bulls tickets. The Bulls saw his story on TV and offered him a chance to see his favorite team in action.