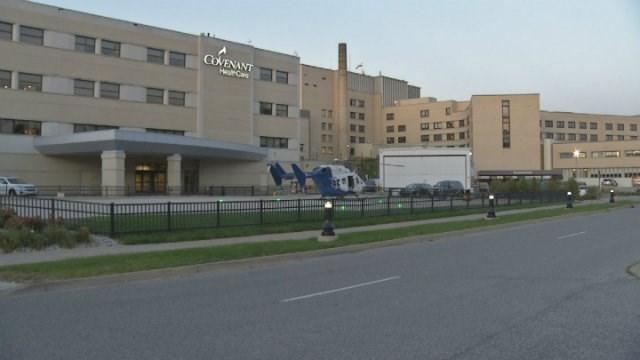 "I fell from the roof right there and I landed on this corner post on my chest. I struck the ground," Crowley said.

What was supposed to be a simple roof repair turned into the beginning of a physical and financial nightmare for the West Branch resident.

"It was over quick. I struck my head and I was bleeding a little bit. I was unconscious for a short period of time," Crowley said.

He felt OK so he drove himself to the hospital. It didn't take long before he knew something just didn't feel right.

"My condition deteriorated. They put me with my head down and feet up. There was a scramble around me, monitors, alarms going off. Nurses scurried into the room, put IVs in my arm and a catheter in my bladder and oxygen in my face," Crowley said.

It turns out Crowley had a severely injured spleen.

After being treated at West Branch Regional Medical Center Crowley had to be transported to Covenant for their specialized services.

In just minutes and a little over 60 miles from West Branch, he arrived by helicopter to Covenant Medical Center in Saginaw.

His daughter Erin Crowley feared the worst. She thought it had to be pretty bad if they were flying her dad to a different hospital.

It was pretty bad, but Keith Crowley was treated and back on his feet in a couple of days. That's when his financial nightmare began.

He received a bill in the mail from the helicopter service Med-Trans. He owed more than $34,000.

"I didn't think much about it. I figured OK, we have insurance. I'll be covered," Keith Crowley said.

The I-Team wondered what options people have if this happens to them.

Can patients refuse the helicopter if they're alert and of sound mind? The answer is yes, bu at their own risk.

"It's a tough situation because air med transport is a very effective intervention, but it's not appropriate for every patient. Where it is most appropriate is in those time sensitive, life-threatening situations," said Richard Sherlock, president and CEO for the Association of Air Medical Services.

Every year about 550,000 patients in the United States are flown by a medical helicopter for emergencies, according to the Association of Air Medical Services.

A flight to the emergency room can get pretty pricey, like Keith Crowley's $34,000 ride.

Patients should know their insurance coverage ahead of time.

"You're in this life and death situation. I wonder if anybody ever thinks to ask if this is covered," Keith Crowley said.

That's why patients should know which services are covered before something happens.

"There are a number of programs that have membership programs and for a small fee every month you can join a membership program that will cover the full cost of an air medical transport should you ever need one. So you're paying for a transport ahead," Keith Crowley said.

Since Keith Crowley's air ambulance flight was not fully covered Sherlock suggests working with the air medical provider to help resolve the situation quickly. They can help patients advocate with their insurance company.

"No air med program in the U.S. wants to see a patient put in a financial crisis because they just had a medical crisis," Sherlock said.