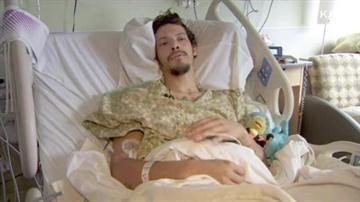 VANCOUVER, Wash. (CNN) -- A man in Washington state was injured, but survived a fall into a wood chipper.

"I'm feeling alright. Not too bad. It's been a rough couple of days. But I'm doing good, I'm hanging in there," said Frank Arce.

Something was stuck in the wood chipper, so he turned it off to get the object out.

Once he got into the wood chipper, it turned back on.

Arce says going through the machine itself wasn't the worst part about it.

"The not knowing what was going to happen," said Arce.

We asked if he thought he was going to die.

"There was a thought but it was more like something was telling me I wasn't going to die that day. I felt I had a lot of angels out there with me that day. A lot of people looking out for me," said Arce.

He has the ink to prove it. The tattoo on his chest says "Send me an angel."

He has seven broken ribs, a collapsed lung, bruises and deep cuts and multiple surgeries ahead.

Arce will be in the hospital a couple more weeks.

His company is paying for his medical bills.

The state is investigating.