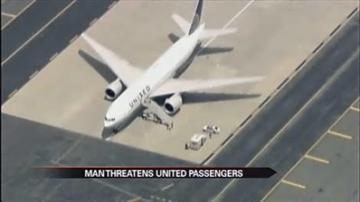 NEWARK, N.J. -- A scary situation unfolded on a United flight from Hong Kong to Newark at 30,000 feet.

A passenger on the plane started shouting threats to passengers midflight.

According to passengers on board, the man was ranting about national security issues, the CIA and spying.

Passengers had to help tackle the man, and bind him for the remainder of the flight.

While the plane was still in the air the FBI said the man had claimed everyone aboard the plane was being poisoned. That was not the case.

He was arrested as soon as the plane touched down.