Man who shot at 'Big R' shoplifting suspects speaks out 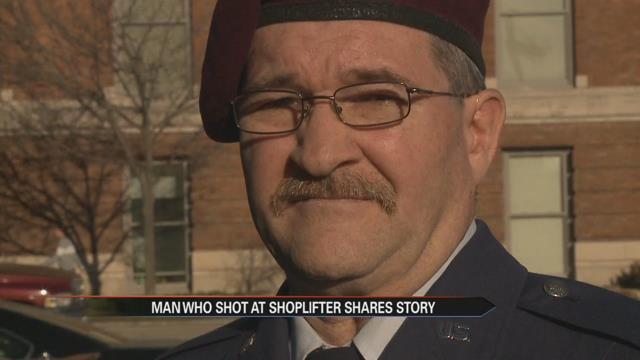 The man facing felony charges for shooting his gun in an attempt to stop suspected shoplifters in Elkhart is speaking out.

Norman Reynolds fired one shot in the parking lot of the Big R farm supply store on South Main Street in Elkhart in mid October.

He spoke to the media for the first time Friday morning after appearing in court.

Reynolds is a decorated army and Air Force veteran who said he’s worked with firearms for 45 years.

As two shoplifting suspects got into a truck in the parking lot of the Big R in October, Reynolds said he fired one shot in an attempt to stop the suspects from getting away.

“I wanted them to stay there [in the parking lot] until the police arrived,” Reynolds said.

Reynolds has a permit to carry a concealed firearm.

He said he only opened fire because the suspect in the passenger seat of the truck had dropped out of sight and Reynolds didn’t know if the suspect would pop back up with a weapon.

Reynolds said he fired one shot at the truck just behind the passenger seat because he felt threatened.

“I figured if [the suspect] had a weapon, he wasn’t gonna use it then,” Reynolds said.

Nobody was injured in the shooting and the suspects ultimately got away, but Reynolds now faces two felony charges for his actions.

Reynolds said he never intended to shoot anyone; he just wanted to scare the suspects into waiting for the police, which is why he placed his shot where he did on the truck.

“There’s no way the bullet was going anywhere else,” Reynolds said.

He still has his permit to carry, but Reynolds said this experience has led him to no longer arm himself.

“I really, really feel uncomfortable,” Reynolds said. “So [my wife and I] hardly ever go out. I pretty much stay in my house cause I don’t feel like I can defend myself and I will not be a victim.”

He still supports people arming themselves for protection, but urges people to get some kind of training.

But for now, Reynolds said he will refrain from carrying his own gun as he waits to find out his fate.

“I have to completely rethink my life now because of this,” Reynolds said.

If convicted – Reynolds is charged with criminal recklessness with a deadly weapon and pointing a firearm – Reynolds could face up to five years in jail and up to $10,000 in fines.