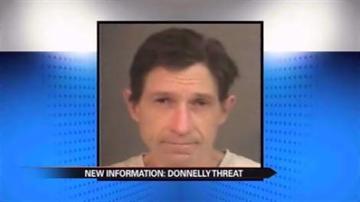 Much like Loughner, who was diagnosed as a paranoid schizophrenic, Keiling was found incompetent to stand trial.

Doctors described Keiling as having paranoid, grandiose, and bizarre beliefs.

Something he showed frequently in letters he wrote while committed.

In a letter to the federal judge he wrote: "I shall be pleading with the CSIS. Your community has dreadfully wronged me and my family over and over and over!”

The CSIS he refers to stands for the Canadian Secret Intelligence Service.

Keiling even claimed to have contacted the Israeli embassy to request pro-bono representation for his case.

In a letter to Joe Donnelly written in early 2012, Keiling wrote: "I don't need psychotropic drugs, I need mercy." and, "Anyone that would use Gabrielle Giffords’ misery to further their career, would most definitely scapegoat me or anybody else that is vulnerable to the attacks of an incumbent power monger."

Keiling’s condition was not improving so he was moved to Butner Federal Medical Center in North Carolina in June of 2012.

He was eventually medicated involuntarily.

On September 25, he wrote, "He seems much more coherent and lucid in his communications with me."

Changes were apparent even in Keiling’s own letter. In this letter he writes, "As far as Dr. Scronce's claim of paranoid, grandiose, and bizarre beliefs, I've come to the realization that she's not entirely wrong."

Then on Monday, just before they were going to begin selecting jurors for his trial, Keiling took a plea deal.

Keiling will be sentenced for his crime in April.

The maximum sentence he can receive is 10 years behind bars.