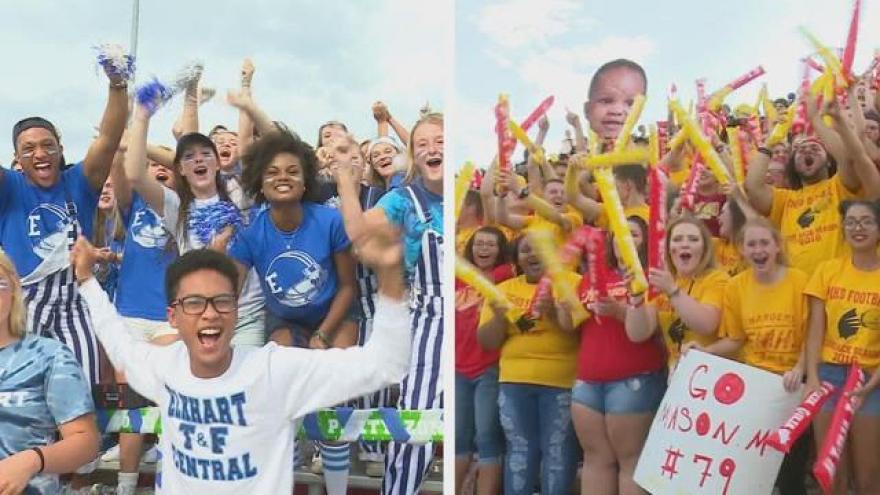 After four years in Elkhart Central High School, the Lion has a new home in Memorial.

5000people came out to the game tonight to cheer on their teams.

This wasn’t only a battle between Elkhart Central and Memorial football teams. The fans—especially the student sections—have a bit of their own rivalry.

“This is the best feeling in the world. It is one of the best nights of the entire school year, so I have so many butterflies in my stomach, and I’m so excited,” said Morgan Tepe, a Central High student.

“The Mangy Lion is such a big deal. It’s been going on since 1974, and it’s when Central High School and Memorial High School get together and play each other for the city football championship. It brings out a good crowd. It’s a great rivalry. The kids are really friends with one another, but when they step out on the field, they’re fierce competitors, I assure you,” said Elkhart Community Schools Athletic Coordinator Robert Woods.

“It just gets better and better. We prepare ourselves for this moment, for this night, where both schools go head to head and just like give the experience of a lifetime,” said Chargers drum major Elizabeth Gonzalez.

“The Blazers have won it the last several years, but it’s been very close, and last year they won at the end. The Chargers were ahead, and the Blazers came back and won at the end, so tonight will be another chance, and we guarantee an Elkhart win,” said Woods.

“We never see each other, so this is one of the only chances we get to be together and see who is better than who, because everybody wants to win—it will be great to bring Mangy back,” said Gonzalez.

“It means sooo much. It’s something that our parents went through. We’ve went through. Our older siblings went through, so it’s sad that it’s not going to be a thing pretty soon, but we’re just going to live in the moment and enjoy it while we still have it,” said Central student Nic Carr.

The rivalry may not exist anymore, because the school board is talking about re-combining the high schools into one. Nothing is decided yet though.

For now, the Mangy Lion has a new home in memorial.