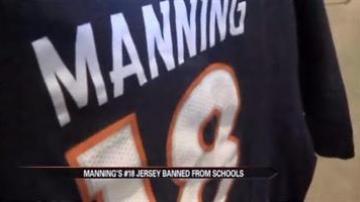 COLORADO -- A Colorado school district has banned Broncos' jersey #18 because the number is considered to be part of the gang culture.

The #18 happens to be the number of new Broncos quarterback, Peyton Manning.

And because of the ban, one student had to take his favorite player's jersey at school.

"We're Broncos fans ourselves, so it has nothing to do with that, it's just wanting to set a consistent, solid example," Roger Fiedler, a spokesman from the school district said.

The boy and his family feel the number 18 should be celebrated an not feared.