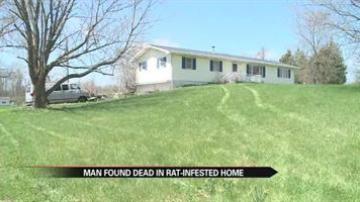 CULVER, Ind. -- A 71-year-old man's body was found in his home after police conducted a welfare check Wednesday night. The Marshall County Coroner and Health Department said the home was infested with rats.

The coroner said an autopsy was scheduled for Friday for 71-year-old Harvey Moore. His body was found in his home in the 16000 block of Redwood Road.

"It's just a shame that the man passed away and had no family," said Ron Vanhorn, a Redwood Road resident.

Vanhorn has lived on Redwood Road for 30 years.

He says neighbors look out for each other.

"They're a close knit bunch. Everybody gets along, really doesn't bother anybody, but if you get in trouble, you've got good neighbors," said Vanhorn.

Vanhorn says a neighbor called for the welfare check and that's when they found Moore dead and all the rats Moore had been feeding.

He's also worried about the home being vacant now that it has been ruled unfit for habitation.

"A home that's vacant can breed its own problems also and my biggest concern is that it's handled properly," said Vanhorn.

It could breed more critters, mold or other health hazards that go along with abandoned properties.

"A family moved in just across the road and there's others close by. A lot of wooded area and open spaces, but I would be concerned for everyone," said Vanhorn.

The Health Department went to the home Friday morning to declare it uninhabitable.

A health officer will bring in rat control to keep the problem from spreading to homes nearby.