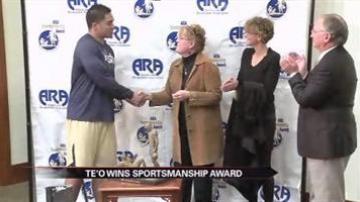 One Division I football player is given the award every year.

He has become the face of the 2012 Notre Dame football team- but for more than just his stunning stats.

"We have been incredibly lucky for the past four years culminating in this year who so perfectly captures the values of the institution,” said Jack Swarbrick, Notre Dame Athletic Director.

Thursday, Te'o was rewarded for his humility, charity and overall sportsmanship both on and off the field-traits he says are a direct result of his upbringing.

"I hope I've made them proud and this award has definitely showed me that to a certain extent I did listen to them when I was younger,” said Te’o.

Te'o says even with the regular season behind him, and the next game more than 5 weeks away, he's still not thinking about the Heisman Trophy or the many other awards he could win over  the next week.

He says he just wants to just enjoy his last few days on campus as a Notre Dame student.