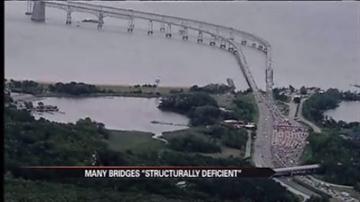 If you are hitting the highways you may think twice about road and bridge safety after the Washington state bridge collapse.

That means one out of every nine bridges has some part of it that is in poor condition.

Some say Washington DC's Key Bridge is ready to fall away.

"Structurally deficient sounds like it is going to fall down so that is not the case, it just means there is a defect that is being watched over time as they do their inspections," said Jim Wiley, former NTSB failure analyst.

The bridge in Washington state was a design flaw that finally led to failure. The reinforcement steel can corrode, leaving a potential problem.

Civil engineers want to see a 60 percent increase in spending to remove thousands of bridges from the deficient category.