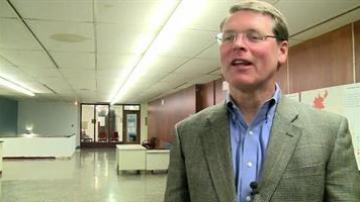 SOUTH BEND, Ind. -- In his first week on the job, Deputy Mayor Mark Neal is proving he's a hands on guy.  Monday, he attended his first common council meeting since taking over for Mayor Pete Buttigieg, who is deployed with the Navy Reserve.

Neal took the podium during the meeting to talk about what he has on his agenda, including the abandoned homes initiative, and also revamping the city's parks.

He says he's not wasting any time in taking over some of the city's biggest issues.

He also said he was looking forward to attending council meetings, something Mayor Buttigieg wasn't always able to do.

"I'm happy to attend council meetings, keep up with the activity.  I think for Mayor Pete, as an elected official, he has other responsibilities beyond attending meetings. I think I'm accustomed to them and happy to sit in them and learn from them," says Neal.

Neal says his focus is to maintain momentum on the programs they've already started.