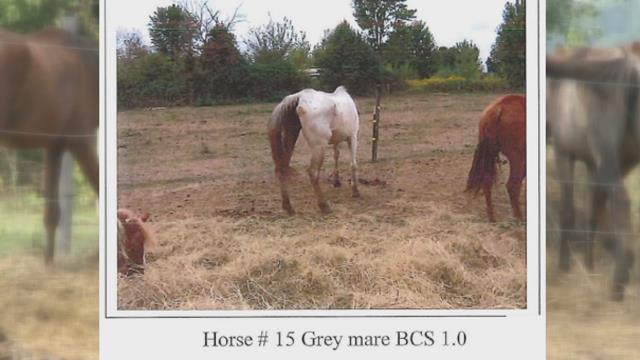 A month after issuing a warrant for two suspects believed to be responsible for Marshall County’s largest case of animal neglect the Marshall County Sheriff’s Department is asking for the public’s help.

Officials are looking for Brian and Stacy Watts who may be responsible for the neglect of dozens of animals.

One of those animals was in such bad shape officials thought it needed to be put down, but one woman was determined to save it.

When Marshall County Sheriff’s Department showed up to the abandoned ranch full of animals, a frail grayish mare was identified as horse number 15.

“A vet that was originally on site said that he wanted to euthanize her over at the watts farm,” says Megan Luther, who previously owned the horse.

Luther knew the horse’s real name was Wynter, a mare she owned for three years.

Despite animal specialists ranking Wynter’s health at a one on a scale of nine and using words like poor and extremely emaciated; Luther loaded her up on a trailer.

“I just sat there and was like she will be lucky if she makes it and if not, at least she is home,” says Luther.

Seven weeks later Wynter is healthier with a brighter coat and a plumper frame. Despite the odds she is steadily gaining weight.

“She has a lot of fight in her. She is tough. I didn’t think she was going to make it,” says Luther.

Luther is filled with joy watching her horse roam her grounds but the journey back to good health has been trying.

“I was so scared I would walk out here and find her down. I would come out to the barn several times a night to check on her. Make sure she wasn’t getting sick from her feed because she wasn’t being fed there,” says Luther.

Luther says since Wynter’s time at the Watts’ lack of care worsened her arthritis. The mare was missing patches of hair that were being attacked by a fungus known as rain rot but now a vet that often checks up on Wynter says things are looking up.

“She is progressing but definitely a ways away from where she was,” says Luther.

It will take another three to four months to completely recover and by that time Luther hopes law enforcement can catch the couple she entrusted with her horse.

“It would be nice to get some justice for the animals,” says Luther.