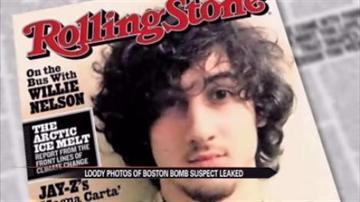 The controversial new cover of Rolling Stone magazine hit newsstands on Friday across the country and in Michiana, but new photos of the suspected Boston bomber from the night of his capture have been released.

A Massachusetts state police officer leaked the pictures to Boston Magazine after the new cover was revealed.

He said he released them to show the "real Boston bomber" and not someone who would grace the cover of Rolling Stone.

That man, who is a 25 year veteran of the force, could now face disciplinary action.