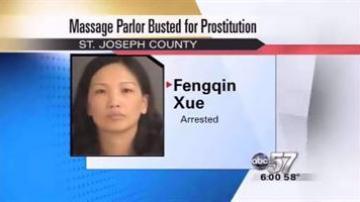 An investigation was launched after officers received several complaints about suspicious activities going on at a massage parlor on State Road 933.

Police said that one woman was offering sexual favors at the parlor for money!

34-year-old Fengqin Xue of Chicago was arrested and is being held in the St. Joseph County Jail.

Police and the Health Department visited four other massage parlors in the area as part of the operation, but found no evidence of prostitution going on thereo. No charges will be brought against these other businesses or the people who work there.

ABC57's Jillian Mahen is trying to uncover more details about what happened. We will have an update in later editions of ABC57 News.