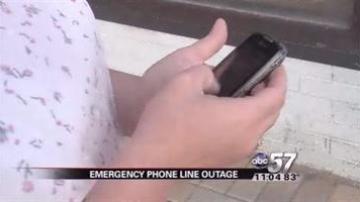 La Porte, Ind. -- After 10 hours, phone service across two counties were finally restored. An outage that kept everyone from calling in or out of the 911 dispatch centers in both LaPorte and Porter counties.

The massive outage happened around 6 a.m. Monday, causing city officials to jump into action on social media sites to help spread the word and provide residents with alternative numbers in case of an emergency.

Cathie Wallace was just one of several people who didn't have any cell service. Like many, Wallace turned to her land line, but when that phone line wasn't working either she knew something was wrong.

"Nothing, absolutely nothing is all I heard. I though hmm..why has no one called, why has no one text? This is not good, " said Wallace.

Wallace says she jumped online and that's when she learned what happened. "It's very nerve racking because if you need the police, the fire, or ambulance you depend on the phone to be able to call someone for help and not having it is very scary".

Officials said a utility company, working just outside Westville, cut a fiber optic line while trying to replace a telephone pole that had been damaged in a car crash the week prior. The damage knocked out power to several land lines, along with cell phone towers in the area. However, city officials are still unsure about how many people were affected.

"I think all of those different entities funnel through this fiber optic line, so it really recked havoc on Porter county and LaPorte Counties," said Mayor Blair Milo.

Mayor Milo said her biggest concern was safety, so she turned to Facebook to help alert the community. "Porter County is suppose to be the back up for LaPorte County and vice versa. So, thankfully it was a quiet day and I think a lot of us have some lessons learned to take away from this problem."

Mayor Milo said making sure this doesn't happen again will be a new priority for the city. Especially since she also had trouble communicating with the city's department heads during the phone trouble.