Mayor announces new leadership at State of the City address 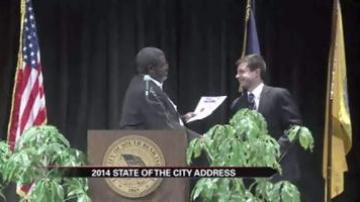 SOUTH BEND, Ind. -- The city of South Bend is welcoming its incoming deputy mayor. During his annual State of the City address Mayor Pete Buttigieg announced former City Controller Mark Neal will help lead the city while he is away.

In what marks Mayor Buttigieg’s third State of the City address and one of the last times he will speak publicly before his upcoming deployment to Afghanistan, he spoke highly of the city of South Bend’s achievements in 2013.

First, hitting on a reduction in violent crime.

“Our city is encouraged by the 50 percent drop in homicides last year compared to 2012. But nine homicides citywide in one year is still nine too many,” he said.

The mayor also updated residents on status of ongoing projects such as ‘A Thousand Homes in a Thousand Days’ set to tackle vacant and abandoned homes with the hope to strengthen neighborhoods.

“Today there are 140 fewer vacant and abandoned houses than when we started and most of these were addressed through repair. Not demolition,” Mayor Buttigieg explained.

Mayor Buttigieg spoke to the city’s current unemployment rate of 8.7-percent. He says that number is down from 12-percent when he took office in 2012. The mayor also talked proudly about recent innovations, like the new smart garbage trucks as well as new technologies police are using to track and pinpoint violence.

But perhaps the most important thing on people’s minds was the question of who will the lead while Mayor Buttigieg is away on deployment.

“With just a few days before that begins. I could not be more confident that the city will remain in good hands during my absence. Our incoming deputy mayor will be a superb leader for the administration and the community,” they mayor said.

Neal, who has served as the South Bend City Controller through 2013, says he is ready.

“I’m certainly ready to take on the responsibilities of deputy mayor. I think the mayor tonight confirmed the vision, confirmed the path forward, in terms of us working together with our council, with our citizens, partnerships throughout the community to do the hard work that needs to be done,” Neal said.

The mayor leaves for Afghanistan at the end of this month as a member of the Navy Reserve. He will return in September.