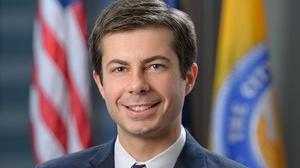 South Bend Mayor Pete Buttigieg announced he will be seeking a second term in office.

"It's been a productive and fulfilling term, but there is much more work to do," the Mayor said in statement. "As our city prepares to celebrate her 5th, we have only begun to unlock the potential of our community. What we do now will set the tone for the half-century to come."

Four years ago, some of you asked me to think about running for Mayor of South Bend. I was just 28 years old and it was hard to picture at the time, but with your support we won a five-way primary race in May 2011 and went on to win in November with 74% of the vote.

Since then, our hometown has made tremendous progress. Unemployment is down by almost one-third compared to when I took office. We've announced almost 2,000 jobs created in our City and tens of millions of dollars in new business investment.

We are more than halfway toward our goal of fixing or removing 1,000 vacant houses to strengthen our neighborhoods, and our downtown is more active than we've seen in decades.

Public safety has continued to improve, and our finances remain among the strongest in the state. Our use of technology has been transformed, and the new 311 system has simplified city services on everything from water bills to trash pickup.

It's been a productive and fulfilling term, but there is much more work to do. As our city prepares to celebrate her 150th anniversary, we have only begun to unlock the potential of our community. What we do now will set the tone for the half-century to come.

The old debate about whether our city would live or die is over: South Bend is back.Now it's time to make sure our neighborhoods, our economy, and our administration keep heading in the right direction.

Less than six months from now, South Bend will hold its May primary election for all City offices, including the Clerk, all nine Common Council seats, and the office of Mayor.

Filing doesn't open until January, but I want you to know that I will be asking voters for four more years as mayor. I'm ready for a second term, to build on the great work we've done since you brought me into office to deliver a fresh start for South Bend.

We'll work hard for this, just like last time. And I hope, like last time, that I can count on your help. None of our progress in South Bend would be possible without your support.

Stay tuned for more information as we set up our campaign organization for 2015—and as always, thanks for all you have done for me and for South Bend.

See you on the campaign trail,