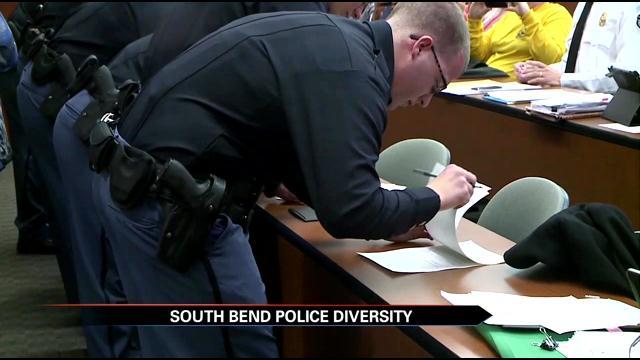 The lack of diversity in police departments has been a major topic nationwide and in South Bend.

“We cannot just wish it away, this is a real issue,” said South Bend Mayor Pete Buttigieg. “It is incredibly important that we have a police dept that reflects the community. Often we still have challenges with people being willing to provide info that can help solve crime, there are even stories of shooting victims refusing to share what happened to them because of that mistrust.”

The mayor says trust is key.

“Part of how you build that trust is making sure that the composition of the police force reflects the community that it serves," said Buttigieg.

Mayor Buttigieg says, “Diversity has been a challenge and is a national problem.”

The mayor says these numbers are the reason the city will soon offer hundreds of dollars to officers who help bring in new recruits.

City Council President Oliver Davis says he sees a dire need for a diverse police force, especially in his district.

Davis says it is not just about a language barrier or cultural differences –it is just as important for officers to have compassion.

“We want our law enforcement to make sure that they have that color of love when they work with people because as people reach out they can look in your eye, even if they did something wrong, they know that you have a caring heart with them," said Davis.

As of January 2015, the city will be pulling out all the stops to try to bring in recruits who can bridge the gap.

“We are looking for everybody. South Bend wants the best police candidates they can find, that is the bottom line,” said South Bend Police Captain Mattie Taylor.