Mayor Dave Wood gives his state of the city address 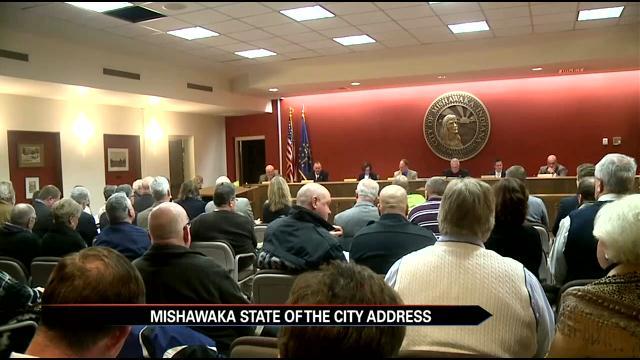 On Monday, Mishawaka Mayor Dave Wood delivered his State of the City address to the common council and residents. He discussed last year's accomplishments and his plans for this year.

Mayor Wood talked a lot about how the city is debt free, and how construction is at its highest level since 2008.  He said just take a look at the opening of Costco, he says this is a good example of the quality of life in Mishawaka.

Mayor Wood took a look back at last year, and the city's accomplishments.  He described Mishawaka in three phrases: fiscally stable, clean, and efficient.

One of the things the mayor was most proud of, crime in the city was down 10-percent last year.  It has been consistently declining since the mayor took office.  He made sure to thank the city's public safety department for this accomplishment.

The mayor also discussed the Church Street construction. He discussed the landscaping, street lighting and turn lanes. He added there would be a big announcement about the project in June.