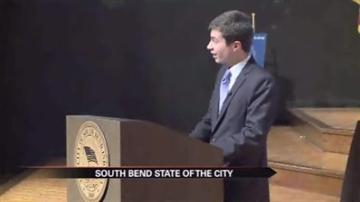 SOUTH BEND, Ind. -- Just days after a deadly plane crash in South Bend city limits, Mayor Pete Buttigieg took to the podium to deliver his State of the City Address. In it, he highlighted the importance of working together to improve city resident's lives.

After taking a brief moment of silence to remember the victim's of this past week's plane crash, South Bend Mayor Pete Buttigieg wasted no time in addressing some the major issues facing the city.

"We need to take more risks around here," Buttigieg said.

He laid out his vision for the rest of the year to a packed auditorium Wednesday night. Part of that vision includes tackling the city's abandoned house problem.

These places allow crime to thrive and affect neighborhood property values. Last year, the city saw a spike in the number of homicides.

"We cannot tolerate another summer like last summer," Buttigieg said.

He also talked jobs. This year saw the addition of 70 new ones at RACO. And along the river, some development has taken place.

"I'm hoping we see the Mayor build on the success we've had with culture," said resident David Guthrie. "And actually develop real economic advancment in terms of jobs and income."

"The government's real issue is to protect us," said resident. "We as citizens have to participate in government to get good government."