Mayor faces possible recall, election to be held in May 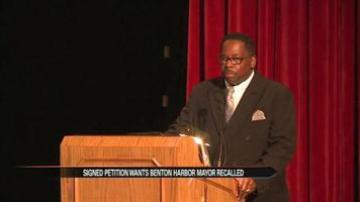 BENTON HARBOR, Ind. -- A group of residents in Benton Harbor garnered enough signatures to force an election where Mayor James Hightower could be re-elected or voted out of office.

Pinkney needed 393 signatures. The county clerk says there were 402.

But not everyone is in favor of booting Mayor Hightower.

"The recall should not be happening, this is a city that's going through a major transformation," said former Benton Harbor commissioner Bryan Joseph.

"Right now there's water that's backing up into people's home, we've got frozen pipes in various parts of the city so there are much bigger issues than a recall proposal," said Joseph.

And Benton Harbor desperately needs money and for businesses to move in.

"In order for businesses to invest in any community you have to have stability within your school district and within city government," said Joseph.

He says this recall isn't helping at all.

A special election will be held on May 6. Hightower can either be re-elected or someone else can be elected mayor.

People who are considering running for mayor have the next week and half to file with the Benton Harbor City Clerk and Berrien County Clerk.