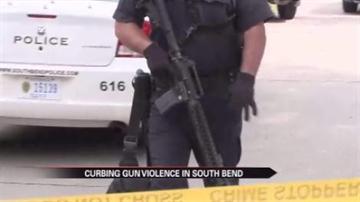 SOUTH BEND, Ind. --  2012 was a pretty scary year for folks in South Bend.  There were multiple shootings and murders in the city.

So now the Mayor is making sure 2013 is safer for everyone by cracking down on illegal gun use and gun violence.

He plans on collaborating with mayors and law enforcement from around the country to tackle gun violence here in South Bend.

“I have had mothers look me in the eye and say how are you going to get these guns off the streets,” said Mayor Pete Buttigieg.

People in South Bend are shaken up over the amount of gun violence in 2012, Mayor Pete Buttigieg included.

“When people get shot in cities, mayors get phone calls, so it is very real to us,” said Buttigieg.

So now the mayor is trying to put  stop to those phone calls, by curbing the gun violence with knowledge he hopes to gain by joining Mayor’s Against Illegal Guns.

The mayor has been in communication with mayors and law enforcement from around the country and he says he already has some great ideas on how to fight gun violence here in South Bend.

“One of the things we realized was that cities, because of our police departments, are the biggest customers gun companies have.  So we are going to take a hard look at who we are purchasing from and hold them accountable for their practices,” said Buttigieg.

The mayor says he knows this problem won’t go away overnight, but he says this coalition is the first step in the fight against illegal guns.

“I will not rest until we have a better answer than we have right now,” said Buttigieg.