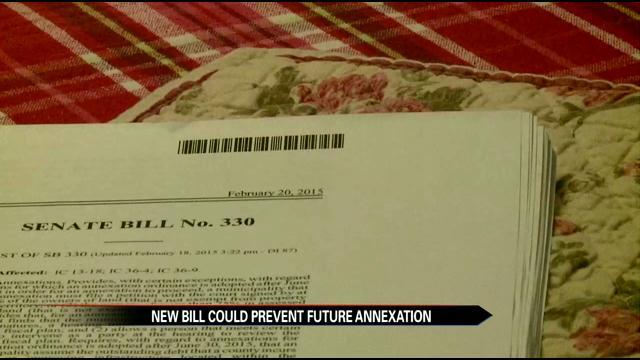 Indiana lawmakers are considering a new bill that could change annexation laws and give more power to homeowners. The bill passed in the Senate in late February and will now head to the House.

In Michiana, the city of Elkhart has recently annexed several areas.

Elkhart Mayor Dick Moore says he's disappointed in what this bill could mean for the city if it passes.

"I do believe this is going to discourage economic development across the state," says Mayor Moore.

The mayor says without growth, cities die. And he believes Senate Bill 330 would prevent the city of Elkhart from growing.

"It's got some features in it that will make life for us pretty difficult as far as growth and economic development is concerned," says Mayor Moore.

If the House passes this new bill, it would make it more difficult for cities to expand.  The new law would require 51-percent of those new residents to support the annexation.

Terry Karre supports the bill and has spent time in Indianapolis arguing his case with lawmakers.

He says how the city has dealt with annexation in the past hasn't been fair.

At the beginning of the year, nine areas were annexed into the city of Elkhart.

Karre is part of the group that is taking the city to court over the forced annexation.

"This area has no value to the city other than a tax dollar, there's no future development, and it's just greed on the city's part," says Karre.

Karre, and other supporters of the bill, says it would give people back their rights.

If this bill passes, it would have no impact on areas already annexed to the city, since those were done under current state law.  But it would impact any future annexation.