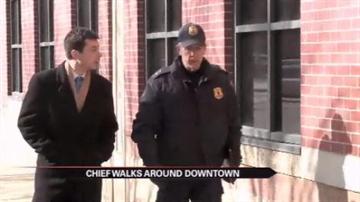 "Become acquainted with the South Bend community; all of the various communities of interest. Today's focus will be on the downtown business community,” said Chief Ron Teachman, South Bend Police Department.

It was a short two block walk from the county city building to the first business they dropped in on - Bruno's Pizza.

A few minutes later they stepped next door to the Christian Science Reading Room where Chief Teachman met with Eva Patterson.

"This is so important to meet him; he seems friendly too. So he wants to come to church one Sunday,” aid Patterson.

Teachman wants to meet with as many people as he can, but says there are a lot of demands on his time.

"I'm busy trying to get certified with the state, there are some prerequisites that go along with this new job; especially being a transfer from outside of Indiana,” said Teachman.

Still, some officers in the department wish the chief was a bit more attentive to them.

They say, he's only stopped at one of the three daily roll calls.

The mayor was quick to come to his defense.

"There's only so many hours in the day, but he's somebody who cares deeply about getting to know the officers and I think the majority of the officers recognize that and appreciate it,” said South Bend Mayor Pete Buttigieg.

Downtown, Teachman and the mayor bumped into the co-owner of Fiddlers Hearth and spent a few minutes talking.

He says, he is glad to see them downtown, even if it wasn't on Main Street where his business sits.

"It's good that the mayor and the new police chief get about walking the beat as they did in earlier days, with the police walking the beat, with their nightsticks and getting to know the businesses,” said Terrance Meehan, co-owner of Fiddler’s Hearth.

Almost as quickly as it began, the mayor and the chief's walking tour was over.

The mayor had to call it quits for a 3 p.m. appointment.

Buttigieg says Friday’s neighborhood visit was part of a program he started during his first year in office that was meant to get beat officers out of their cars and walking their beats.

The last time they toured a neighborhood was last summer when the temperatures were in the triple digits.